Since the advent of whole-genome sequencing, transposable elements (TEs), just thought to be ‘junk’ DNA, have been noticed because of their numerous copies in various eukaryotic genomes. Many studies about TEs have been conducted to discover their functions in their host genomes. Based on the results of those studies, it has been generally accepted that they have a function to cause genomic and genetic variations. However, their infinite functions are not fully elucidated. Through various mechanisms, including de novo TE insertions, TE insertion-mediated deletions, and recombination events, they manipulate their host genomes. In this review, we focus on Alu, L1, human endogenous retrovirus, and short interspersed element/variable number of tandem repeats/Alu (SVA) elements and discuss how they have affected primate genomes, especially the human and chimpanzee genomes, since their divergence.

Transposable elements (TEs), mobile segments of genetic material, were first discovered by McClintock [1]. Since then, they have been identified in a variety of eukaryotes [2]. Recent genome sequencing projects have consistently shown that TEs make up ~50% of primate genomes, while coding DNA occupies only ~2% of the genomes [3-5]. TEs are generally divided into two categories, DNA transposons and retrotransposons (Fig. 1), based on their manner of mobilization. DNA transposons move using a cut-and-paste mechanism [6]. In contrast, retrotransposons move in a copy-and-paste fashion by duplicating the element into a new genomic location via an RNA intermediate [7]. Thus, retrotransposons increase their copy number more rapidly than DNA transposons. 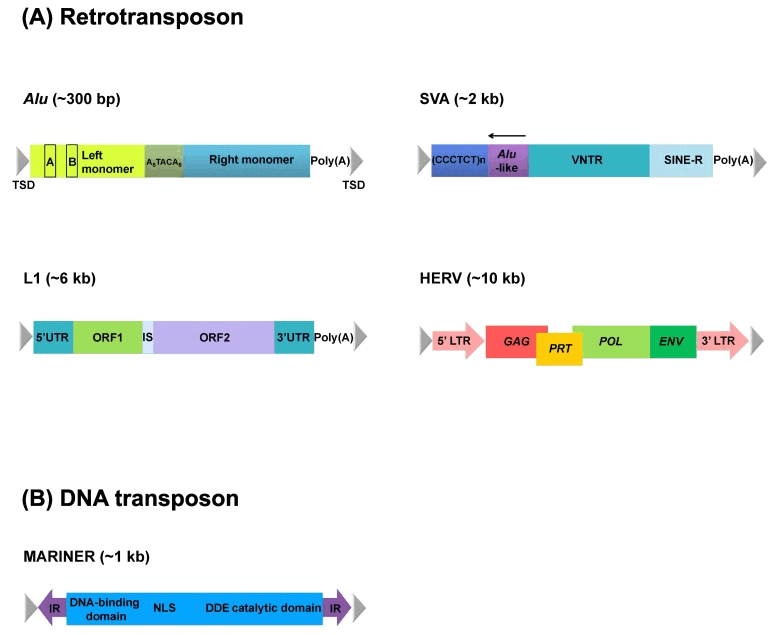 Fig. 1 Structures of transposable elements. These elements could be categorized into retrotransposons (Alu, long interspersed element [LINE], and human endogenous retrovirus [HERV]) (A) and DNA transposons (e.g., MARINER) (B) based on their manner of mobilization. In addition, autonomous elements (e.g., HERV and LINE) have coding genes responsible for their own mobilization but also other nonautonomous elements (e.g., Alu and short interspersed element/variable number of tandem repeats/Alu [SVA]). Alu consists of two monomers separated by an A-rich connector, one of which, the left monomer, includes internal RNA polymerase III promoter (A and B boxes). Full-length of LINE is ~6 kb and has open reading frames (ORFs) encoding RNA-binding protein, endonuclease, and reverse-transcriptase, which are flanked by untraslated regions (UTRs). ORF1 and ORF2 are separated by an ~60-bp-long intergenic spacer (IS). SVA contains a (CCCTCT)n hexamer, Alu-like sequences, variable number of tandem repeat (VNTR), and short interspersed element-R (SINE-R). An arrow on Alu-like sequences indicates the direction of Alu. HERV has gag, prt, pol, and env genes flanked by a long terminal repeat (LTR), which encodes capsid protein, protease, polymerase, and envelop protein, respectively, used in viral infection. As an example of DNA transposon, mariner has a gene encoding transposase with a DNA-binding domain and catalytic domain flanked by an inverted repeat (IR). All elements are flanked by target site duplication (TSD) through integration. DDE, the conserved DDE sequence of the mariner transposase; NLS, nuclear localization signal.

Retrotranspons include short interspersed element (SINE), long interspersed element (LINE), and human endogenous retrovirus (HERV). Alu and short interspersed element/variable number of tandem repeats/Alu (SVA) elements are primate-specific retrotransposons, and their full-length is 300 bp and 2 kb, respectively. The Alu element is the most successful SINE in terms of its copy number; ~1.2 million Alu copies exist in the human genome. LINE is ~6 kb in length, and thus, it is much longer than the SINEs. This element has two open reading frames encoding enzymatic machineries essential for the propagation of the three elements; the Alu element depends on reverse transcriptase of LINE for making their dispersed copies in the host genome [8]. In contrast to SINE and LINE, which do not have long terminal repeats (LTRs), the full-length HERV (~10 kb) has two LTRs, and three genes-gag, pol, and env-are located between them [8, 9].

Studies on active TEs have suggested that the elements could alter gene expression by providing cis-regulatory elements, such as promoters, enhancers, and transcription factor binding sites [10]. Through these mechanisms, altered transcriptional activity could lead to dysfunctional and abnormal proteins. Through de novo TE insertion within a gene, TEs could alter a gene product, which could be either harmful or beneficial to its host genome [11, 12]. In cases where an inserted TE causes a harmful effect on its host genome, the TE is likely to go to inactivation and fossilization by evolutionary accumulation of mutations and silencing effects [13].

Since the divergence of the human and chimpanzee, ~6 million years ago, many TEs have propagated in each genome. Among them are the Alu, L1, SVA, and HERV-K (HML-2) elements. During the past 6 million years, 5,530 Alu, 1,835 L1, 864 SVA, and 113 HERV-K (HML-2) elements are estimated to have been newly inserted in the human genome (Table 1) [8, 14, 15]. These elements could act as an agent causing human-specific genomic rearrangements via de novo TE insertions, TE insertion-mediated deletions, and homologous recombination events [12, 16-19]. Furthermore, some of the recent integrated TEs are capable of producing new copies in the human genome. These de novo TE insertions have the potential to cause a genomic difference among human populations and even human individuals, which could be related to human phenotypes and diseases [20].

In this review, we describe species-specific TEs and discuss how they affect their host genomes, focusing on illustrating the mechanisms that they utilize with examples. Taken together, we suggest that TEs, often called ‘junk’ DNA, in fact have many functions and play a significant and dynamic role in primate genomic evolution.