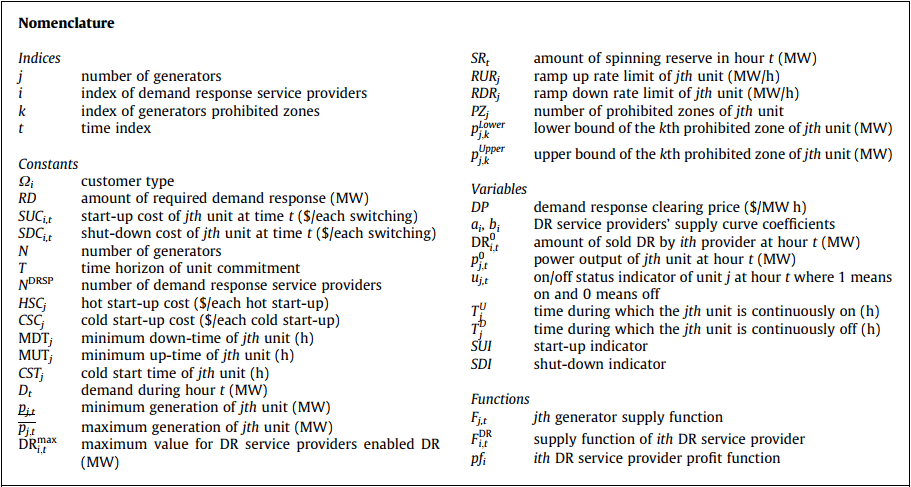 This paper investigates the impact of demand response resources (DRRs) as the consequence of implementing demand response programs (DRPs) on power markets. Indeed, this paper incorporates commercial concept of DRPs with unit commitment (UC) to solve “unit and DR commitment” problem. This mixed problem will decrease the network operation cost by using of DRPs’ potential to mitigate some UC constraints and avoiding some highly priced generation of units. Here, employing the proposed DRPs model is considered as a new concept in electricity market. In this paper, a dynamic approach is proposed for participating DR service providers in power markets in order to maximize their profits. This paper also aims to concurrently consider the aforementioned commercial DRPs supply model with the generators supply curves in the unit commitment problem, which is solved to minimize operational costs considering multifarious constraints. Performance of the proposed approach is investigated through numerical studies using a standard IEEE 10-unit test system. The results show the efficiency and advantage of the proposed methodology.

Highlights ► A dynamic approach has been proposed for bidding strategy of DR service providers. ► Demand response programs have been introduced as a commercial commodity. ► DRSP supply model has been considered concurrently with the supply curve of units. ► Decreased amount of operation cost due to enrolling DRSPs.

In the strategic plan of International Energy Agency (IEA), demand side activities are introduced as the first choice in all energy policy decisions, because of their potential benefits both at operation and economic levels [1]. Demand response programs are short-term activities taken by customers to adjust their electricity consumption in order to mitigate the volatility of electricity market’s prices; or reliability problems on the electricity network [2]. Cost and emission reduction, decrease of fuel dependency, increase in power system reliability, and an increase in revenues are some of the benefits resulting by implementing demand side management (DSM) programs [1,3,4]. There are three types of demand side management measures based on the overall purpose of the load management (LM) program [5]:

Demand response is established to motivate changes in electricity consumption by end-users. Dramatic increases in electricity demand have made the use of DRPs more attractive to both customers and system operators [2,6–8]. DRPs are divided into three basic categories so-called, Time Based Rate Programs (TBRPs), Incentive-Based Programs (IBPs) and Market-Based Programs (MBPs) as depicted in Fig. 1.

Each of these categories is consisted of several programs. Time Based programs include: Time of Use (TOU), Real Time Pricing (RTP), Critical Peak Pricing (CPP). These programs expose customers to varying levels of price exposure; the least with TOU and the most with RTP [2]. In TBRPs, the electricity price changes for different periods, so customers should adjust their consumption according to the time and associated tariffs.

IBPs consist of Direct Load Control (DLC), Emergency Demand Response Program (EDRP), Interruptible/Curtailable service (I/C), Capacity market Program (CAP). DLC and EDRP are voluntary programs, and if customers do not curtail consumption, they are not penalized. I/C and CAP are mandatory programs, and enrolled customers are subjected to penalties if they do not curtail when directed. In IBPs, customers are being encouraged with independent system operator (ISO) or local utility to moderate their consumption. Moreover, MBPs include: Demand Bidding (DB) and Ancillary Service (A/S) programs. DB programs encourage large customers to provide load reductions at a price at which they are willing to be curtailed, or to identify how much load they would be willing to curtail at posted prices. A/S programs allow customers to bid load curtailments in electricity markets as operating reserves. In the market-based approach, all players are categorized in two groups: DR Service Users (DRSUs) as well as DR Service Providers (DRSPs). DRSUs need demand response to improve their business and system reliability while, DRSPs are aggregators and customers who provide DR to increase their benefit. This structure creates an efficient market for trading DR. As introduced in [9], DRPs is treated as a tradable commodity in the power market where, the demand response exchange operator (DRXO) collects both the aggregated demand and individualized supply curves. Then, it clears the supply and demand at a common price [9].

DR programs are faced with some important barriers to be successfully implemented in the network. Ref. [10] has raised some important barriers related to DR. One of these common failures of demand response is the inability of customers to continuously participate in DRPs so called ‘‘response fatigue’’. Demand response service providers are considered in this paper as entities to manage the participation of end-users in DRPs. A dynamic approach is proposed to model the behavior of DR service providers in order to maximize their profit. At the same time, the ISO tries to operate the system with minimum possible cost. The idea of ‘‘Unit and DR commitment’’ problem is proposed in this paper that ISO should integrate generators’ supply curves as well as DRSPs’ DR supply curves and then solving the problem.

In fact, this paper considers both side of DR trading market, i.e. selling and purchasing. On the one hand, there are demand response service entities who are executers that manage customers’ DR capacities and provide DR resources in the network. As above mentioned, their main goal is to maximize their profit of providing DRPs.

From this point of view, this paper introduces a dynamic method for DRSPs to participate in demand response programs. On the other hand, ISO caters all resources in the network to optimally provide network’s load. His optimal schedule is to minimize the operation cost of the network. Unit and DR commitment program will give more flexibility to ISO to manage systems’ constraints and needs to improve the system operational conditions. The results of solving the proposed problem will simultaneously determine the on/off status of generators as well as DRSPs and also the amount of power that they should provide during the pre-specified time horizon. The time frame of DR trading must coincide with that of the system. Both time frames could be divided into different time scales such as day ahead, hour ahead, real time, etc. This paper addresses only the day ahead time scale.

As mentioned, in this study, DRSPs’ supply curve will concurrently be considered with generators supply curve in a unit commitment (UC) problem. Generation scheduling and UC problem have always been presented as important issues in power system researches. UC has a combinational nature with true multi period characteristics in the form of nonlinear and non-convex as well as mixed-integer problem. UC involves on/off status of generation units and generators production values to meet the forecasted demand for a given time horizon [11–13]. The optimal schedule should minimize the system production costs during the study period, while satisfying load demand, spinning reserve requirements, and the physical as well as operational constraints of each individual unit [14–17]. Several deterministic, heuristic, and hybrid methods have been proposed in the last decades for solving the UC as a large scale, nonconvex, and mixed-integer combinatorial optimization problem. In general deterministic methods are unable to find a solution within the available time frame, when the problem is medium or large size [18,19]. These limitations have been redounded to introduce the heuristic methods [20–22]. Heuristic optimization algorithms may have some advantages to solve such a complicated optimization problem, while the main drawback of heuristic methods is that they cannot guarantee the optimal solution. Since there exist a need for more improvement to the existing unit commitment solution techniques, hybrid methods have been experienced [23–25].

DRPs are useful tools for the independent system operator, which can be activated within a relatively short time in critical system conditions. In the authors’ previous work [26], an economic model of price/incentive responsive loads for DRPs has been developed based on the concept of ‘‘price elasticity of demand’’ and ‘‘customers’ benefit function’’. The focus of [26] is on direct load control (DLC) and emergency demand response programs (EDRPs) which are categorized as voluntary incentive-based programs. In these programs, it is considered that ISO prizes the customers for load reduction, but does not penalize their violation. Furthermore, for investigating both economic- and environmental-driven measures of voluntary IBPs, a new formulation of cost-emission based unit commitment problem associated with DRRs (UCDR) is introduced in this authors’ work [26].

Providing the required amount of load and reserve is considered as a crucial issue of generation scheduling problems. Therefore demand response resources can also be called to satisfy the value of demand load and reserve. As previously mentioned, DRPs are useful tools for the ISO which can be activated within a relatively short time in critical system conditions. Therefore, employing of demand response programs can be considered to cover part of the concerns of load and reserve supply. Ref. [27] has introduced indices for evaluating customer response. Then, scheduling of generation and demand response has discussed in this reference. Economic models of tbrps and ibps have been addressed in many researchers in recent years [28– 33]. Valero et al. [28] have discussed methods for customer and demand response policies in new electricity markets. [29,30] have presented an economic model of price responsive loads based on the constant value of price elasticity. Market clearing programs are discussed in [31], which takes their economic benefits into account. In the authors’ previous studies [26,32–34], an economic model of responsive loads has been derived. Nguyen et al. [9] have considered a typical linear structure for DRSPs’ supply curves with constant coefficient for MBPs. In this paper, a dynamic structure for the demand function is suggested. The proposed model is called dynamic, because the constant coefficients of DRSPs’ supply curves are determined for each hour of scheduling, separately. The dynamics of the markets are the results of players’ decisions [35]. In the proposed dynamic approach, each of DRSPs’ supply curves is achieved based upon other providers’ behavior in previous hours. It also depends on the amount of demand response, which is required for each hour. Furthermore, the aforementioned dynamic demand response supply curves will be considered beside the generators’ supply curves in a unit commitment problem. The optimum scheduling of generators and the DR penetration rate will also be attained as the result of this problem. As above mentioned, the aim of DRSPs is to maximize their own profit by trading DR. However, reduction of operation cost is considered as the main aim of ISO. Furthermore, generators can have some strategies to maximize their own profit. However, their strategy is behind the scope of this paper. The rest of the paper is organized as follows. The problem formulation is explained in details in Section 2. The procedure of investigating a dynamic approach for participating DRSPs’ in demand response programs is elaborated in this section. Section 3 conducts the numerical simulations. Finally, concluding remarks are drawn in section 4.